Alison Rhoades
Alison is a writer at Ecommerce Magazine, which exists to highlight digital innovation in the fast-growing industry of e-commerce.
Feb 1, 2018
Thrive Market’s Nick Green on Bringing Healthy Food to Families Across America
From startup to "Thriving" ecommerce business.
✉️ Get top ecommerce knowledge in your inbox once a week.
Brought to you by Octane AI: Learn more about Facebook Messenger marketing for Shopify

Clean and green eating has been on the rise for some time in the United States, with local co-ops and industry giants like Whole Foods springing up in urban and suburban cityscapes from California to Connecticut. Yet the majority of Americans living in rural America and food deserts in urban capitals suffer from a lack of access to healthy food options and adequate education on living a healthy lifestyle. This has had overreaching consequences for our country, with an astounding 9.4% of Americans suffering from diabetes as recently as 2015.

In 2014, Nick Green, along with his two co-founders Gunnar Lovelace and Sascha Siddartha decided it was time for a change. The three entrepreneurs founded Thrive Market, an online membership community delivering high-quality organic, non-GMO products right to your door. Dedicated to bringing healthy products to the mainstream, Thrive Market cuts out the retailers and middle men, bringing customers goods at 25-50% off retail price. They also offer free memberships to low-income families, teachers, veterans, and students, which, in addition to discounts on healthy food, includes diet-friendly recipes and a video course detailing how to eat healthy on a budget. 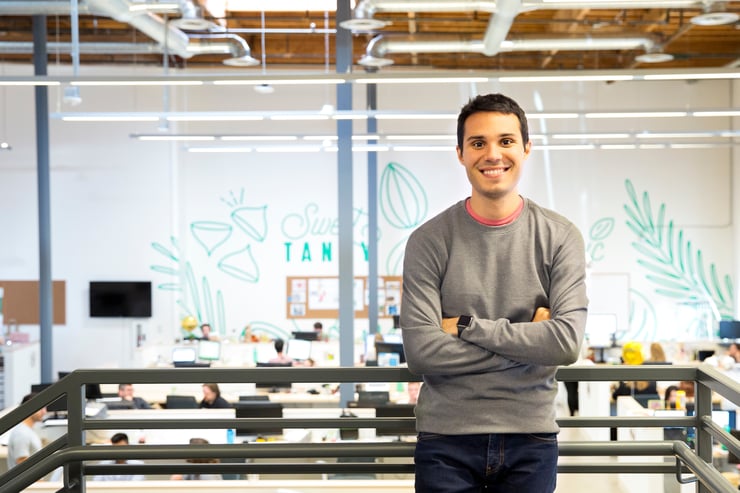 “What originally got me so excited about this company is that that social mission and business opportunity were one in the same,” Nick tells us. “We also think it’s an imperative when lifestyle diseases are ravaging our country.”

The response has been phenomenal. Thrive Market now boasts tens of millions of products and over a million orders thus far shipped to all 50 states - all in just three years time.

Things took off quickly. “I’d be lying if I said we were prepared for the growth,” Nick laughs. Within three weeks of the launch, the orders coming in were already overcrowding their 2,500 square foot workspace, forcing the trio to move storage containers to their homes and garages to manage the stock they were turning over. But being resourceful is part of the job, and the Thrive Market founders rose to the task. “All three of us are serial entrepreneurs,” explains Nick, “And so what we are prepared to do is be scrappy and solve problems ad roll up our sleeves and get our hands very dirty very fast.”

From Startup to Thriving Ecommerce Business

Unlike many young startups, Thrive Market’s first $10,000 was raised by health and wellness influencers after first being rejected by over 50 venture capitalists. “For venture capitalists there is a bias toward products that serve costal, millennial elites,” Nick muses. “We were looking to serve all of America.”

Influencers, from bloggers to YouTube stars to best-selling authors, had the opposite reaction, insisting that access to healthy food was a huge problem in their communities and for their audiences.

Thrive Market brought over 100 influencers on board as investors, who in turn shared their product with their followers and community. The process proved so fruitful that it now has a full internal agency solely dedicated to managing those relationships, and Nick tells us that influencers still drive a large percentage of their traffic.

Another challenge for Thrive Market was getting people on board who were as dedicated to the vision as the founders were. “We’re a mission-driven business,” says Nick. “What gets us up every day and challenges us to try to solve this really hard problem is that we just believe with a lot of conviction that it needs to be solved.” Hiring like-minded people has been imperative to fostering a great company culture, and to growing a thriving business, Nick insists.

“People feeling good in their workspace, with the people they’re working with, and about their team is so key. It’s not only the most important thing in a business, it’s also the hardest thing to do when you’re scaling quickly, because there is always the pressure to hire faster than you should.”

Thrive Market’s business model, Nick admits, is heavily influenced by that of Costco, wherein the customer is asked to invest money upfront and can expect immense savings in return:

“We wanted to offer natural organic products at or below the price of conventional equivalent, and the only way to do that is to sell them at no margin. So we don’t actually take a margin on the third party brands that we sell, we pass those savings directly on to the members. We make our margin on the membership. So it’s a business model that involves the member investing a little bit, and us delivering a massive multiple of that value back to the member in the form of products that are really affordable.” 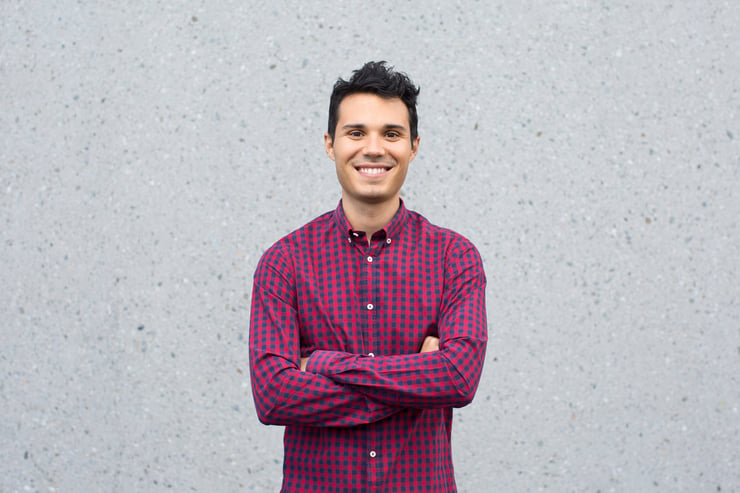 Thrive Market aims to give members ten times the value of the cost of the membership over the course of the year. This means when a customer shops monthly and spends $30-$45 each time, these savings are a given. And when you add exclusive products like their organic, eco-friendly almond butter, carbon-neutral shipping, plus the ability to discover new foods, recipes, and content, the value customers get is substantially higher than the cost of the yearly membership premium.

With a business model contingent on whether members return and make frequent purchases, paying close attention to their online activity and providing them with impeccable value is key. “It’s held us accountable to the standard of creating real value for our members,” says Nick. “We don’t win as a business if members only get a membership for the first year. We will only be able to build a profitable business over time if they renew year after year.”

In terms of metrics, Nick pays more attention to whether or not Thrive Market’s members are active - signaling that they’re getting what they need from the company and are likely to renew - than he does to actual sales. He says they’re “laser-focused” on the amount of purchases happening on the site, customers who have lapsed and are now re-engaging, and their members’ overall activity level. Any membership model, he says, should look at engagement as the most important metric.

A self-described “data-guy”, Nick warns that although Thrive Market invested early in an online data warehouse (they currently use Tableau) and use a lot of tools to micro-optimize different parts of their funnels, that sometimes getting too data-focused means that you miss the bigger picture. 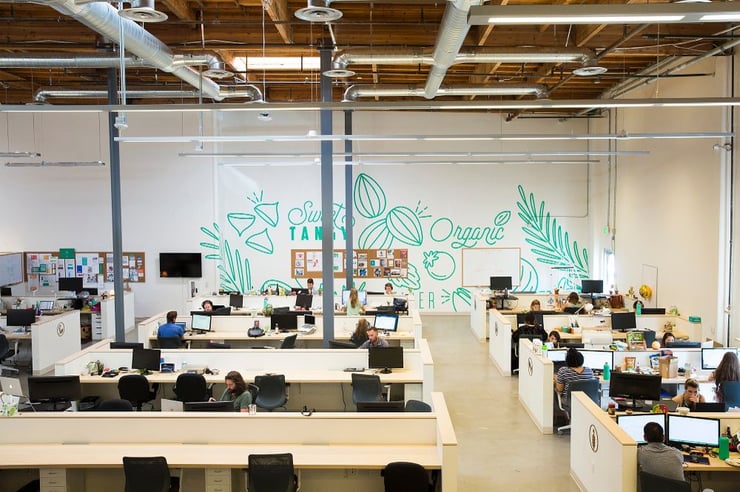 “If your business just needs people to get a single order then fine, just optimize for that single funnel. But if you’re trying to bring in high-quality customers or members who are going to engage with that product over time, you can’t really cheat that. And what you gain in efficiency with that first order you often lose in LTV in the member over time. So we still use a lot of tools to micro-optimize different parts of our funnels and experience, but we’re always careful to check: are we creating the best experience for this customer?”

Understanding who your customer is and holding yourself accountable to them without getting bogged down by data, he maintains, is the best way to run an effective ecommerce business.

Facebook and paid searches have worked well for Thrive Market, as have influencers on Instagram, which help give credibility to the brand. He also reminds us not to underestimate word of mouth, insisting that a sizeable amount of their traffic comes from referrals. With such a great product to plug, it’s no surprise that people are spreading the word.

With Amazon poised to remain the industry leader in the coming years, Nick thinks that ecommerce platforms have an opportunity to innovate outside of that, creating customized experiences that you can’t get anywhere else. The ability, he says, for customers to discover products that resonate with their own identity and sense of values is becoming increasingly important, as is offering transparency about what your products are and where they come from.

Nick has recently taken over the title of sole CEO, yet that doesn’t mean that he’s committed to working around the clock as he did in the earlier days. With a young daughter at home, he now makes it a priority to be back in time for dinner every night, as well as making time for exercise and eating well. “To lead,” he says, “You need to be healthy, happy, and at your best.

Despite the ups and downs, it’s abundantly clear that this founder still wakes up every morning ready to tackle any set of problems that come his way. “I love what I do,” he insists. “You can’t be an entrepreneur unless you’re really passionate about what you do and the problem you’re trying to solve.”